How to Play and Win on Classic Blackjack

From American blackjack to European Blackjack, Double Down variants and many more - it is easy to see that the game of 21 has expanded into new and more daunting territories that it has done in the past. However, although some complexities have been added into these variants, the still work with the basic or the classic Blackjack rules, making it evident that the classic version is still strong and robust in the whole industry. If you're one of the players out there who prefer to play the Classic Blackjack over other variants it comes with from other sites or casinos, then you're not alone. There are also other players out there who would prefer it more and before playing it, it is always better to refresh your mind on the basics. This is even more so, if you are a beginner on the game or someone who has not played this game for quite some time now.

One of the most prominent games at BlackjackMulligan is Classic Blackjack. It's a game loved by all as it is an incredibly renowned option that's on-par with poker games. The game, which you may already know, is more known with its other name, twenty-one. The game has a rich history behind its inception in the gaming industry but one thing for certain is that it has been famous for centuries already, making it a staple already in vast lands worldwide. Regardless if you're playing the game online, it would be best that you also learn more about the basic rules of the game and other information that would be helpful to you and your gaming experience.

The classic game or version of this popular card game, involves a standard 52-card deck but, there are many more variants out there that would boast using 312 cards on their games, which equals to up to 6 decks. These diversifies the gaming experience of players and their chances of winning, while card counting is not allowed. In fact, it is even to the point where some casinos deemed it to be illegal and this can be seen on how the dealer would try to not make use of the bottom half of the deck when he asks you later on to make a cut.

What is the goal of this Game? 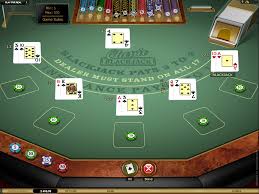 The first answer of many people out there when asked as to what they think is the most primal goal of this game, is that one must get a score that's as close to 21 in value as possible. Although there's some truth to this term, it's definitely not the main goal of the game. The main goal that could help you win is to just basically defeat the dealer in terms of value of your hand. When the cards are dealt to you and the dealer, you'll receive yours faced-up while the dealer received theirs faced-up and faced-down for their two cards. You'll still have no idea of what score the other party has but, if you think that you need some help to actually boost your hand value, you could opt to ask for yet another card to be added on your hand.

If you are lucky enough, you could win just when the cards have been dealt. Winning when the deal has just been made would require you to get a natural or blackjack. This is term used when you get a value that's exactly 21. You'll win a wondrous 2X the amount you've bet. Of course, this is with the assumption that the other party or the dealer doesn't possess a blackjack as well.

When to Hit and Stand

It is important to understand that having a firm knowledge of the existing Blackjack odds is certainly the best online blackjack strategy. Although you may not have other controls when it comes to what cards you'll gain, you should be able to decide confidently when you should make a hit or a stand. When you choose to stand, it means that you are already satisfied with the cards that have been dealt to you. On the other hand, the hit is when you ask for another card, with the goal of trying to get a higher value and try to defeat the dealer. Hitting however, carries with it a huge burden as well. You'll get a card to increase the value of your hand but, if it manages to boost your hand by too much and exceed the value of 21, you automatically lose since you've busted your chance.