What is European Blackjack?

The fame of blackjack remains to be unrivalled up until today. It is something that is as renowned as the game of Poker and has even been featured in a long list of movies and shows that showcases just how big of a gambling card game it is. There's a reason why it is so distinguished compared to other games. The rules of the games are simple, the gameplay itself is fast-paced and more importantly, the house edge is significantly lower, which means that players with skills could end up having bigger chances of winning enormous sums of cash - something that isn't guaranteed if you play on pure luck-based games like Slots and alike. There are also versions of the game that is highly popular today as well, one of which is the European Blackjack version.

At BlackjackMulligan, there's also the American Blackjack and other free play variants that you could try but, that's for a whole new other topics. In this article, we will discuss some of the things that will help you distinguish a European blackjack from a classic one, an American one or other versions of the game. This way, you can rest assured that when you're going to play the game either on a brick and mortar casino or an online waging establishment, you'll have a fair idea of the odds, rules, and even some basic blackjack strategy that you could use in order to help you have higher chances of winning the game.

Although the rules of the European version of twenty-one is greatly influenced by the classic version to the point where they are nearly completely alike, there are key points to their differences that you should be aware of. One of these differences lie on the number of cards to be used. The European and the American version, instead of using a simple 52-card standard deck, makes use of a 6 standard decks containing over 312 cards. This would make card counting tactics a bit harder to employ which is basically what the establishment is aiming for in some circumstances. 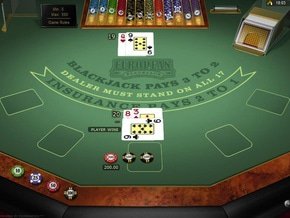 It is also important to know the values of the card that are being dealt with in this kind of game. Fortunately, there isn't much change when it comes to the card values in this game. The number cards return the value provided by their number, the face cards like the Queen, King and the Jack hold the value of 10 as well. Ace, on the other hand, has its value interchanging from 11 to 1, depending on the current situation you're dealing with along with what you prefer.

When it comes to the actual deal, the difference between these versions make themselves more apparent. Instead of dealing with everyone one card at a time including himself - the dealer, the European version has put some twist or difference on how the deal is made. The dealer first provides one face-up cards to the participants on the table. When the participants have already gotten their cards, the dealer gets one for himself in a face-up position. Again, the dealer provides yet another face-up cards to the users, giving them the two cards. The dealer doesn't get any card yet after this and instead, he allows the players to decide whether to hit and stand. It is only after everything is done, would the dealer finally get his second card from the deck and this time, in a face-up position rather than faced-down.

If you have already read about the American Blackjack, you should know that the dealer is dealt with faced-up and faced-down cards, where he'll be presented with the opportunity to peek whether he has a natural or what we call a blackjack. In the European version, this would not happen, and it simply doesn't make sense with the process above as well, since the deals would be made with the last value of the dealer's hand only drawn after every action of the users have been pulled up.

How To Win In European Blackjack

It is easy to see that the game is still highly reliant on luck but, your choices would greatly affect how much you'll lose and how much you'll gain in each round. The way you handle your resources through your options, would without a doubt, be the best strategy you could ever employ on your gaming experience. Pair that up with more knowledge regarding the odds, strategy card charts or even get a trainer who could guide you properly, and there's no doubt that it's only going to be a matter of time before you manage to rack up some wins from this market.